How empires grab and hold on to power

Being recognized as divinely anointed didn’t guarantee acquiescence, but it was still a huge asset

Dominic Lieven is a British historian who has written extensively on European, particularly Russian, history. His latest book, In the Shadow of the Gods, is about emperors and empires. It examines their historical scope and the characteristics that contributed to dynastic success or failure.

At over 400 densely written pages (excluding notes), the book is a hefty read. Here are some of its themes:

Contrary to the impression you might glean from current controversies, imperialism isn’t a post-1500 European invention. Far from it. As Lieven’s survey makes abundantly clear, empires have existed for millennia and in virtually all geographies and cultures. 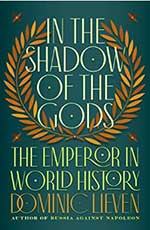 Tagging the first identifiable emperor, Lieven goes back more than two millennia BC, at which point Sargon of Akkad ruled today’s Iraq and Syria. Over 1,000 years later, the Neo-Assyrians made Sargon look like small beer. In addition to having an empire at least four times larger, they upped the ante for ruthless exploitation of conquered territories and peoples.

Conquest was a pre-condition for establishing empire, but it wasn’t enough to sustain it. To quote a review of Lieven’s book: “Empires are founded by war and personal charisma, but they are sustained by paperwork and compromise.” And by diligent management of considerations like dynastic succession.

Alexander of Macedon – known to most of us as Alexander the Great – is a splendid example of imperial transience. A towering figure in his day and perhaps one of the greatest generals in history, his accomplishments weren’t built to last.

Lieven puts it succinctly: “Alexander left behind on his death few institutions and two infant sons to sustain the empire he had conquered. The inevitable result was civil war and disintegration.”

While Alexander had flair, glamour and courage, he also had a desire for personal glory that bordered on megalomania. In contrast, the more prosaic Habsburgs created something that lasted nearly 1,000 years. Chinese dynasties, too, were adept at longevity.

There were different approaches to the question of managing succession.

By assigning power to the oldest son, the European practice of male primogeniture sought to maximize stability. From the get-go, everyone would know what was supposed to happen.

But as always, there was a trade-off. Sometimes primogeniture would produce an incompetent or underage heir. This was when institutional framework really mattered. A truly robust system required the ability to handle those situations.

In contrast, other imperial cultures – such as the Mughals in India – encouraged the contending sons to compete for the throne, thereby prioritizing merit. The price, however, was periodic civil war. Still, it worked for a while. At its 17th-century peak, the Mughal Empire reputedly accounted for around 20 per cent of global economic output.

Successful empires also needed to cultivate an element of balance.

If your territory was vast and your subject peoples were diverse, a judicious “light-touch” came in handy. There was a lot to be said for leaving much of the governance to local elites, who’d be willing to trade ostensible sovereignty for a privileged place in the hierarchy. Military muscle always did better when supplemented by calculated craftiness.

Then there’s the melding of imperial legitimacy with religious authority.

Lieven again: “One key reason why hereditary, sacred monarchy prevailed was that in the majority of pre-modern societies political thinking was practically a sub-branch of theology. In most cultures, explanations and justifications for events and institutions on earth were generally found in some version of Heaven. Things happened because the gods willed or at least allowed them to do so.”

Even if the emperor wasn’t personally a believer, it made practical sense to associate the throne with the deity. Being recognized as divinely anointed was hugely advantageous, rendering challenges or resistance deeply problematic. While it didn’t guarantee security or acquiescence, it was still a formidable asset.

Napoleon, for instance, understood the symbolic value. Although the French revolution had been at odds with the Catholic church, he still had the Pope officiate at his coronation.

But perhaps the most impressive blending of religion and imperial politics came with the astonishing rise of the Arab caliphate in the three generations following Muhammad’s death. Sweeping out of Arabia, it came to rule everything from Spain and North Africa to the borders of India and China. While acknowledging the vulnerability of the empires the caliphate displaced, Lieven ascribes much of its success to the cultural/ideological power associated with Islamic fervour.

Maybe there’s a reason why empire can be characterized as “the dominant form of power in history.” If something keeps happening, it may not be an accident.