Painting was therapy at first, ‘so I wouldn’t spiral into depression.’ Now she has her own gallery

Troy Media publisher Doug Firby and travel editor Lisa Monforton are part of a group of Canadians who call themselves ConnecTour. Starting in May in British Columbia and ending in October in Newfoundland, they hope to make an 8,000-km bicycle journey across the country, discovering how the COVID-19 pandemic has reshaped our lives and our sense of community. Watch for their reports on Troy Media. More information on the cycling tour is available at ConnecTour.ca. To help them meet their goal, click here. 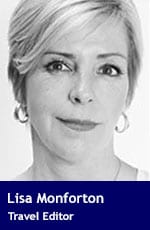 Walking through the burnished wooden doors of Katherine Muir Miller’s gallery on the main street of Perth, Ont. is like walking into a delightful cross-section of Canada’s natural beauty, painted impressionist in style in lush and vivid colours.

But how she arrived at this place, owning a gallery that showcases her artwork, with her beloved 11-year-old dog always at her side, has been a long, tough hill journey. During that time, she was forced to make choices in the face of pain and a sudden life change.

Six years ago, Muir Miller, 59, a mother of five who lives in Ottawa, worked as an emergency room nurse. But a traumatic fall from a height, in which she broke bones in her face and tore every muscle in the C2 area of her neck, forced her to give up her career and her athletic lifestyle. She played hockey on two women’s teams, took ski trips every year to places like Banff, Lake Louise and Whistler, and had competed in a couple of triathlons. She was also the medical director of a kids’ canoe camp in Temagami, Ont.

“I was super strong and didn’t break my neck,” says Miller. Talking about the accident is still difficult.

Just before the accident occurred, she had only dabbled in painting. Then she began taking lessons with retired art teacher Gordon Harrison, an oil painter in Ottawa, and several other artists. She signed up for an art retreat with Harrison early in her recovery.

“I went to the art retreat … in a neck brace.” She carried on with a couple more retreats, soaking up everything she was learning.

The first time she painted, she copied a work of Harrison’s and said to herself, ‘Did I just paint that?’

“Those first couple of years, painting was an outlet for me; my hockey games went into that. I was like a crazy painter.”

The process of painting was her therapy at first, “so I wouldn’t spiral into depression.”

During neuro-cognitive testing, Muir Miller was also told that sometimes brain injuries can trigger a person’s creative side. And the more she painted, she became obsessed with making colours.

“You have to visualize to make colours. I was obsessed with ‘How do I get that green?’ I realized I just needed practice.”

She continued to paint at a ferocious pace and began to be happy with the results, continually improving. Her husband, Fraser, supported her and told her that her paintings were looking stronger.

Her painting process involves studying a photo for a week and then perfecting the sketch before applying the colours.

As she accumulated work, she began to do juried art shows for a few years, but found them exhausting. Eventually, she began getting her work into galleries, such as the Santini Gallery in Ottawa. She also wanted to show in galleries in Montreal, where she was born and raised, as well as in Muskoka and Toronto.

Then COVID-19 hit. She was walking down Perth’s shopping area on Gore Street with a friend when they spotted a store for sale at a reduced price. Her friend said she should consider opening a gallery here. With her husband’s nudging and her friend Darlene Kelly’s business acumen, she had the vision that this is what she should do.

Muir Miller is circumspect about making a massive transition because of a sudden, unexpected life change. “People always have choices, and sometimes they are difficult. You have a head injury and are limited … you’re not the same person. I could have gone on the road of self-pity and any medication I wanted.”

But she chose to pursue her art instead.

Her other goal right now is to do her first solo exhibit in Montreal. “I have to get painting. …”

You can view her work at katherinemuirmiller.com.

ConnecTour is now in Quebec. Watch for more stories from the road.

Arts – Painting, Cycling tours, Self improvement, Things to do in Ontario, Tourism